Born in Rome on March 13, 1993. Navy athlete. Champion of Italy from 2008 to 2019. Fourth classified to the European Championships in 2018. Silver Medal in the World Cup in 2015. Enrolled in the course of Master’s Degree in Marketing. 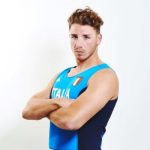 In 2016, the gold at the World University Championships in Poznan and the silver at the World Under 23. Three years earlier, the world silver. He received the bronze medal for the athletic value of the Coni.

Days and hours of training

The competitive team trains at the Reale Circolo Canottieri Tevere Remo in the following days:

If you want to join the team send an email to sport@luiss.it

In the subject specify the sport you want and attached a short sports curriculum.

You will be contacted by the Luiss Sport Office or directly by the Team Manager of the team.